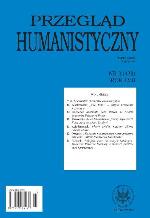 Summary/Abstract: THE WHEAT AND THE CORNCOCKLES. BIBLICAL INTERTEXTS IN THE DOLL OF BOLESŁAW PRUS Summary The purpose of the article is to analyze the function of biblical citations in Bolesław Prus’ The Doll. The first part is an examination of the prefigurational capabilities of the signaled citations, which determine the plot paths of many background characters (the Wysocki brothers, the Krzeszowskis). The second part is dedicated to the so-called citation acts, whose intertextual relations are limited to the scenes in which they were quoted (the Powiśle walk, the story in Skierniewice). In both cases the text of the Bible and its interpretation in theological discourse turn out to be a functional tool for reading many unclear places in the masterpiece of Prus. Trans. M. Bucholc