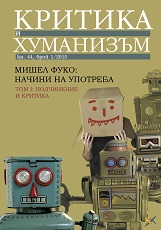 Summary/Abstract: A former professor at the University of Amsterdam and currently a professor at the University of Bucharest, Sorin Alexandrescu is not only a specialist in semiotics, literary criticism, narratology, and poetics, but also a reputed historian of Romanian modernity. His studies of cultural history, such as Romanian Paradox (1998), Looking backward: Modernity (1999) or Identity in Rupture (2000), analyze the founding moments of modern Romanian culture with concepts and methods derived from cultural discourse theory, Foucauldian archeology or textual deconstruction. In this article, I analyze Sorin Alexandrescu’s discourse of method, which can be found in the prefaces of his books on Romanian intellectual history. Dealing with some methodological issues forged by Nietzsche, Foucault, and Ricoeur, Alexandrescu proposes perspectivism as a general strategy of cultural studies. He refutes the sanctifi cation of culture by modern historiography since that sanctification makes impossible a critical reflection on oneself. Such a critical approach does accept breaks, discontinuities, ruptures and Otherness; it allows to look at oneself through the eyes of the other. This does not mean defining Romanian culture as marginal but as interference culture since the distinction between center and periphery is perspectival. Alexandrescu admits that his method for analyzing the discursive strategies of modern cultural historiography is not only a form of resistance, but also (could be) a form of power-knowledge. His metahistorical reflection is a kind of self-analysis, a hermeneutics of the subject in which one can learn how to resist Foucault.