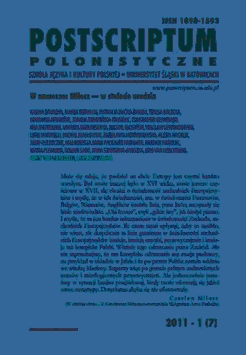 Summary/Abstract: The article analyzes a medium-like creation of a poet in Czesław Miłosz's writings. In his works a poet is presented as a chosen man, stigmatized with an artistic destiny, dependent on „forces‟ and „voices‟. Splitting poet's consciousness enables a medium-like relation, called „instrumental‟ by Miłosz: the artist is being passively subjected to voices like an instrument. The lyric of hauntings, created this way, shows a poet inspired by daimonion's voice and so regarded as theios aner. Miłosz recalls an antic tradition and the idea of divine inspiration (daimon) but above all the idea of daimonion created by Socrates: daimonion is perceived here as „a voice of god‟, or „a divine touch‟. In Miłosz's poems that have a soliloqium form, the voice of his daimonion manifest itself through the rhythm and incantation of speech. Inspiring and „rhythmic whispers‟ of a daimonion that take possession of the poet's consciousness, are also regarded as a compulsion of metre, “disgust of rhythmic speech”. A struggle against a poem, against a “defect of harmony” (described by S. Balbus) is aimed also at daimonion's incantation. However, the rhythmic whisper of daimonion favours the process of self- creation, its lack (as in the poem Bez daimoniona) directs attention to the autobiography and reveals an existential aspect of poet's being.