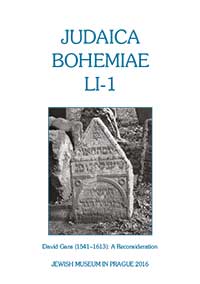 Summary/Abstract: Research on sixteenth-century Jewish historiography, of which the chronicle Tzemah David [Sprout of David] by the Prague scholar David Gans is in some respect the culmination, has been vivified by the ‘historiography boom’ of the last quarter of the twentieth century. This general trend started with the polemical insights of New Historicists (such as Hayden White in his Metahistory of 1973) and has left a deep uncertainty about the nature and function of historical knowledge. Scholars emphasized the narrative, or – to say the same with a Greek word – mythical character of the historiographical endeavor. A complementary research interest has invited historical studies with a particular emphasis on the literary media, social tasks, and institutional framework of the historical profession.2 From the angle of Jewish studies, the research on the eight Jewish sixteenth-century authors of chronicles is mainly remembered through the history-memory paradigm formulated by Yosef Hayim Yerushalmi in his Zakhor thirty years ago, but this study, which the author incidentally did not wish to apply to David Gans,4 is only one position in a far larger debate. Discussion focused on a number of central questions concerning the sixteenth-century revival of historiography: why were there suddenly no less than eight Jewish historians, seven in Hebrew and one in Portuguese? Why were there only eight, as compared to entire libraries on the Christian side? Why did these eight authors have so few successors until the Enlightenment? Do we have to see them as a medieval rearguard, as harbingers of modernity, or as part of the European movement we call the Renaissance? Is there a sense in comparing these Hebrew writers to contemporary Christian humanists?