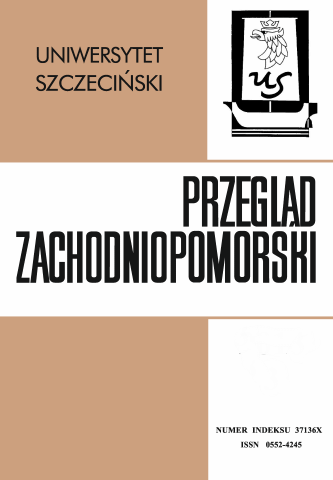 Summary/Abstract: ‘Szczecin’ was a journal that was coming out in the years 1957–1962 as a direct forerunner of the ‘West-Pomeranian Journal’ (Przegląd Zachodniopomorski). So far the contents of the ‘Szczecin’ Journal, as well as its role in shaping the academic community and in influencing the economic, social and political reality have not been fully analysed. Hence the conclusion that this role is underestimated o even deprecated. In all the issues of ‘Szczecin’ historical questions were covered most extensively. Yet, according to what its editor-in-chief, Henryk Lesiński, had announced the journal was to be open to all the disciplines of social science and humanities. As a result, in addition to the historical questions, the journal also dealt with literary and economic problems. Among the authors there were not only representatives of the Szczecin academic community, but scholars from outside as well. In 1963 ‘Szczecin’ was transformed into the ‘West-Pomeranian Journal’, which has been published to date. The change of the name was caused by practical aspects: the former title suggested a narrow fi eld of interest, limited to the West-Pomeranian capital. After the change the regional character of the journal has been better emphasised.