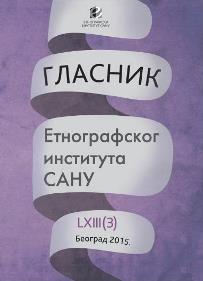 Summary/Abstract: Migration from Gora have been almost always driven by certain economic and political situation, both in Gora and in the region. The migrations became more intense due to the economic crisis of the 1990s and the political changes in Kosovo during and after 1999. This paper discusses the impact of economic and political crisis in Serbia and in Kosovo in the late 20th and the early 21st century, on the migration of members of the Goranci community from Gora. The paper also deals with the impact of migration on changes in cultural practices among members of the first and second generation of Gorani in Belgrade.