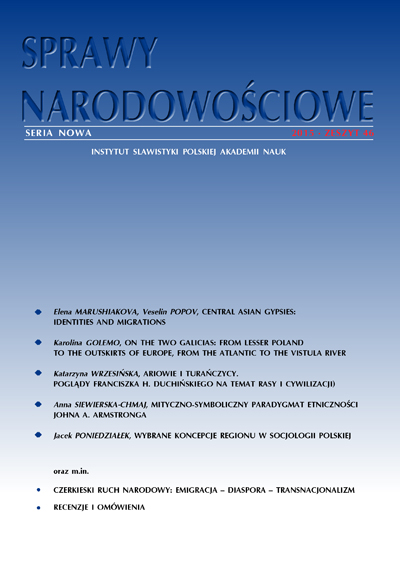 Summary/Abstract: During recent years the topic of Gypsy/Roma migration and identities became burning topic of pan-EUropean public discourse. Much less attention is paid to the Gypsy migrations outside the borders of European Union. The present article has ambitious goal to fulfill this gap and to present contemporary Gypsy migrations in Post-soviet Central Asian in order to see how this “burning” topic looks outside European space. After breakdown of Soviet Union and establishing of new independent republics in Central Asia and in connection to economical difficulties, wars and social unrest, in order to make their living, the communities of Central Asian ‘Gypsies’ revitalised their former nomadic traditions and migrate towards Russian Federation and in frames of Central Asia towards Kazakhstan. There they are earning their living through begging and sporadic work in construction and scrap collection. A central point of this article is the impact of these contemporary migrations on the development of identities and well being of Central Asian ‘Gypsies’. The multilevel, hierarchically structured identities of Central-Asian ‘Gypsies' are analysed as demonstrated in different historical contexts – as former “Soviet people”, member of former ruling class of agricultural proletariat, and as declassed community today; as Central-Asian ‘Gypsies’ or as citizens of respective Central Asian Republics during migrations in Russian Federation in front of Russian majority society and in front of Roma; and in context of the Central Asian region during the migrations to Kazakhstan and in their home countries.