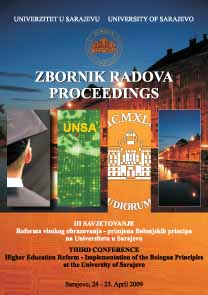 Summary/Abstract: It is no news that the knowledge-concept of the society or Europe, within which the Bologna reform has been implemented, is facing a difficult crisis. In general, the increase of private commercial sector, management and application imperative, has caused a direct influence on the direction of research, significantly reducing the space and freedom of social thought. Oppressing the research and academic freedom is seen in omnipresent “grant-mania”, in which humanities come off second best. Imperative of publishing articles in magazines that are registered at the relevant international database (and the most prestigious of those are a private ownership – Reuters), which implies also writing in foreign languages, may, in perspective, put the communication of knowledge and free criticism in a community in shade, which is where humanities are vulnerable. That could contribute further devaluation of humanities, like in the time of communism, when humanities were ideologically octroyed. When we face the challenge of the Bologna Process implementation, together with the leading western scholars, we should ask ourselves if the neo-liberal ideology of today is imposed as an initiator of the scientific research. The leading European intellectuals comment on the so-far process of “Bolognization” of higher education, especially in the field of humanities, and warn against the “dramatic result of the destruction of theoretical and doctrinal articulations of scientific research. All is being turned into a skill and capability of rating at the business market” (Pardo, 2008:100).