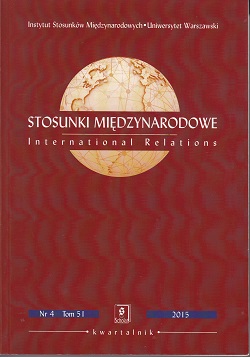 Summary/Abstract: The article analyses the issue of terrorism in Sub-Saharan Africa and the actions undertaken in this respect by the European Union. It describes the reasons for and determinants of terrorism in this region, pointing out their political, socio-economic and cultural sources. It discusses the institutional and legal bases of the EU’s cooperation with the countries of Sub-Saharan Africa in preventing acts of terror in Africa. Furthermore, it discusses the nature and form of financial assistance the EU provides to African countries in their struggle against terrorist groups, focusing on the two major instruments of the EU’s external action in this regard: the Peace Facility for Africa and the Instrument contributing to Stability and Peace. The article focuses on presenting the three major terrorist groups that operate in Sub-Saharan Africa: Boko Haram, Al-Shabaab and Al-Qaeda in the Islamic Maghreb. Against the backdrop of challenges and threats arising in relation to the activity of terrorist groups in Sub-Saharan Africa, the author has characterised the EU’s key objectives in this respect. In this context, he further discusses the actions undertaken by the EU with the aim to, on the one hand, reduce the combat capabilities of the terrorist groups in Sub-Saharan Africa and, on the other hand, ensure lasting and stable development on the African continent and, consequently, eliminate various negative phenomena. The theoretical tools applied in this case study with regard to the EU are the concepts of ‘actorness’, ‘presence’ and ‘civilian power’. It is stressed in this context that the EU is capable of ‘actively and purposefully undertaking actions towards the other actors in the international arena’ and having ‘real influence on international affairs’ by using mainly economic, financial and political measures. The article is an attempt to answer the following questions: what is the role of the EU in addressing the problem of terrorism in Sub-Saharan Africa; to what extent do the actions taken by the EU contribute to eliminating this phenomenon in Sub-Saharan Africa; what are the main weaknesses of and challenges to the European (EU) antiterrorist policy towards Sub-Saharan Africa; do the documents adopted by the EU translate into effectiveness of the EU’s actions and initiatives; what is the nature and degree of institutionalisation of the cooperation between the two regions in terms of preventing acts of terror in Sub-Saharan Africa.