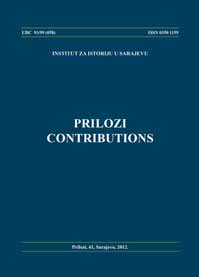 Oduzimanje imovine Katoličke crkve u BiH od 1945. do 1961. godine
The Confiscation of the Property of the Chatolic Church in Bosnia and Herzegovina from 1945 to 1961

Summary/Abstract: During the post-war period the communist government, through tens of of laws, orders and decisions, without compensation or with promised but never fulfilled compensation, acquired for the state a great part of the property of the Catholic Church. The weakening of the economical power and influence of the Catholic Church in Bosnia and Herzegovina began with the agrarian reform, nationalization and expropriation of Church land and property. Especially difficult for the relations between the Church and the State were those laws which influenced the expropriation of Church property. Apart from the Law on agrarian reform and colonisation, those were also the Law on the confiscation of property and the execution of the confiscation from 1945, the Law on the nationalization of private businesses from 1946, with changes from 1948, and the Basic law on expropriation from 1947. Through the mentioned and other laws the state confiscated from the Church, apart from the land possessions, numerous Church institutions, buildings, printing presses etc. The Catholic Church lodged many complaints to the authorities against the appropriation of its mobile and immobile property. The communist government was accused that it wanted to destroy the material basis of the Catholic Church and thus to disable it from performing its spiritual functions. Despite of this, these complaints did not help the Catholic Church to preserve its mobile and immobile property.

Značajnija obilježja procesa mobilizacije radne snage u industriju na području Tuzlanske oblasti (1947-1952) Significant signs of the mobilization process of work force into industry in the Tuzla region (1947-1952) 2006 ISKORJENJIVANJE RELIGIOZNIH UVJERENJA I AKTIVNOSTI UNUTAR ČLANSTVA KPJ/SKJ OD 1945. DO 1958. GODINE ERADICATION OF RELIGIOUS CONVICTIONS AND ACTIVITIES AMONG THE MEMBERS OF THE COMMUNIST PARTY/LEAGUE OF COMMUNIST OF YUGOSLAVIA FROM 1945 TO 1958 2009 ODUZIMANJE IMOVINE SRPSKE PRAVOSLAVNE CRKVE U BOSNI I HERCEGOVINI (1945.-1961.) THE SEIZURE OF PROPERTY BELONGING TO THE SERBIAN ORTHODOX CHURCH IN BOSNIA AND HERZEGOVINA (1945-1961) 2011 Oduzimanje imovine Islamske zajednice u Bosni i Hercegovini od završteka Drugog svjetskog rata do 1961. godine THE EXPROPRIATION OF PROPERTY OF THE ISLAMIC COMMUNITY IN BOSNIA AND HERZEGOVINA AFTER THE END OF THE SECOND WORLD WAR UNTIL 1961 2011 ZASJEDANJA ZAVNOBiH-a I PRVI USTAV NARODNE REPUBLIKE BOSNE I HERCEGOVINE THE SESSIONS OF ZAVNOBiH AND THE FIRST CONSTITUTION OF THE PEOPLE’S REPUBLIC OF BOSNIA AND HERZEGOVINA 2013
2023 © CEEOL. ALL Rights Reserved. Privacy Policy | Terms & Conditions of use
ICB - InterConsult Bulgaria core ver.2.0.1219