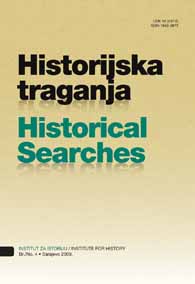 ISKORJENJIVANJE RELIGIOZNIH UVJERENJA I AKTIVNOSTI UNUTAR ČLANSTVA KPJ/SKJ OD 1945. DO 1958. GODINE
ERADICATION OF RELIGIOUS CONVICTIONS AND ACTIVITIES AMONG THE MEMBERS OF THE COMMUNIST PARTY/LEAGUE OF COMMUNIST OF YUGOSLAVIA FROM 1945 TO 1958

Summary/Abstract: The leadership of CPY/LCY held a negative opinion of all kinds of religious beliefs and activities and, therefore, sought from its members to fight actively against all forms of backwardness, religion included. For the Yugoslav communists, religious beliefs represented a backward and unscientific view of the world, which was to be abandoned as soon as possible by every individual. All the Party members were expected to take the lead in the fight against the beliefs that were deemed as backward and historically outdated. The Communist Party demanded from its members to obediently implement atheistic policy in their everyday life. All those members who exercised any religious ceremonies were excluded from the Party membership. The Yugoslav communists began a particularly aggressive campaign against religious inclinations of its members especially in early 1950s. In 1952, at the 6th Congress of the League of Communists, the Statute adopted by the participants decided that the membership in the League of Communists was incompatible with exercising any sort of religious worship and attendance at religious gatherings. The Party ideologues believed that the Marxist worldview was incompatible with any religious beliefs. In additional to the reasons motivated by foreign policy considerations, this stricter party politics vis à vis religious views and activities of members of the Communist Party /League of Communist was caused by the Party’s failed attempts to limit the impact of religion on its members.

Značajnija obilježja procesa mobilizacije radne snage u industriju na području Tuzlanske oblasti (1947-1952) Significant signs of the mobilization process of work force into industry in the Tuzla region (1947-1952) 2006 ODUZIMANJE IMOVINE SRPSKE PRAVOSLAVNE CRKVE U BOSNI I HERCEGOVINI (1945.-1961.) THE SEIZURE OF PROPERTY BELONGING TO THE SERBIAN ORTHODOX CHURCH IN BOSNIA AND HERZEGOVINA (1945-1961) 2011 Oduzimanje imovine Islamske zajednice u Bosni i Hercegovini od završteka Drugog svjetskog rata do 1961. godine THE EXPROPRIATION OF PROPERTY OF THE ISLAMIC COMMUNITY IN BOSNIA AND HERZEGOVINA AFTER THE END OF THE SECOND WORLD WAR UNTIL 1961 2011 Oduzimanje imovine Katoličke crkve u BiH od 1945. do 1961. godine The Confiscation of the Property of the Chatolic Church in Bosnia and Herzegovina from 1945 to 1961 2012 ZASJEDANJA ZAVNOBiH-a I PRVI USTAV NARODNE REPUBLIKE BOSNE I HERCEGOVINE THE SESSIONS OF ZAVNOBiH AND THE FIRST CONSTITUTION OF THE PEOPLE’S REPUBLIC OF BOSNIA AND HERZEGOVINA 2013
2022 © CEEOL. ALL Rights Reserved. Privacy Policy | Terms & Conditions of use
ICB - InterConsult Bulgaria core ver.2.0.0914