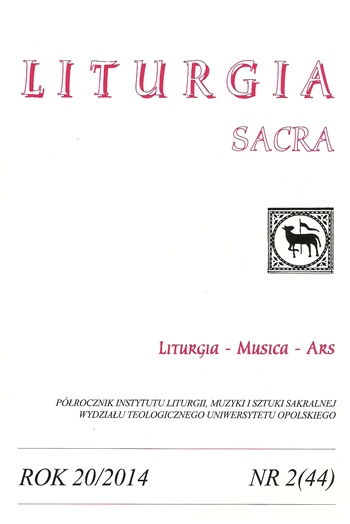 Summary/Abstract: The Liturgical Movement in America began formally with the publication of the first issue of “Orate Fratres” and the foundation of the Liturgical Press under the leadership of Fr. Virgil Michel, monk of St. John’s Abbey in Collegeville, Minnesota, in 1926. From February 1924 to August 1925 he spent nineteen months in Europe studying at Rome and visiting Benedictine monasteries. He returned from his encounter with the burgeoning European liturgical movements to begin the liturgical apostolate. The liturgical movement was an organic part of twentieth century American ecclesial renewal. That movement gathered together American Catholics from all walks of life. Unlike European movement which was centered in or around monasteries, the movement in the Unites States was more pluralistic. Many of the early leaders was ordained (V. Michel, W. Busch, M. Hellriegel, A. Deutsch, G. Ellard), but there was many laic person, men and woman: J. Fern, P. Crowley, D. Day, J. M. Murray, M. Perkins, P. Murin). Following the death of Virgil Michel (†1938), a series of annual gatherings, known as “National Liturgical Weeks” was held every year from 1940 to 1969. They were sponsored first by the Benedictine Liturgical Conference and from 1943 by The Liturgical Conference. From the very beginning of the liturgical movement in this country concerned for religious education. Dom Virgil and his associates were constantly adverting to the privileged role of liturgy in the formation of vital Christians. Liturgical movement perceived an intrinsic relation between liturgy and social re-formation. V. Michel and others suggested, that a liturgical movement should appeal very directly to all who see the need for solving the social and economic problems.