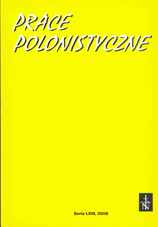 Summary/Abstract: The Crown Tribunal, established in 1578, debated during Little Poland period (Latin: Polonia Minor) in Lublin in the local town hall building. The first seat of the Tribunal — a Renaissance edifice — was built after a blaze in 1575 and in later years converted twice (in the late 17th century and in the 80s of the 18th century). During the Tribunal's activity the town hall was a building with modest architecture decoration and shabby decor. In Old Polish writings the seat of the Tribunal was perceived as a government building or, in a broader sense, the symbol of the universal order. The earthly goods law binding Deputies was rigidly executed as the Universe reflection, perceived as an order straight from God or, in a wider sense, as the World's Order. In Old Polish literature the Tribunal's town hall was compared to the sanctuary of justice and perceived as the symbol of the communication between generations. When speaking about the Tribunal's town hall, it is worth bringing attention to the problem of sarmatization of the Tribunal's sermons. This phenomenon could be examined taking into consideration the Tribunal's cross located in the courtroom or the likeness of St Thomas, the Apostle. In the Tribunal's town hall some biblical events from the Old and New Testament were portrayed following the pattern of The Polish Republic court system.