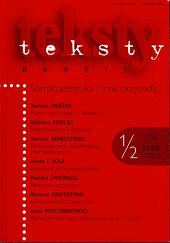 Summary/Abstract: This article deals with relations between space, historicity and literature. The first part concerns the category of memory – its transdisciplinary nature, our contemporary mnemonic situation and importance to literature. In its second part, the essay’s focus moves on to the relation between space and collective memory, considered in the perspective of geo-poetics and inspired by Pierre Nory’s 'lieux de memoire' concept. The leitmotif is ‘places hollowed out from memory’ which have become important topics for modern prose (incl. works by Rymkiewicz, Stasiuk, Liskowacki, Limon, Krall, and others). What literature does is not only talking about venues of memory but also, becoming itself a venue of memory for (the) community.