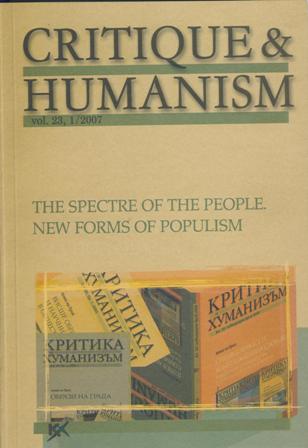 Summary/Abstract: On 26 November 2000 Corneliu Vadim Tudor took everyone by surprise when he won more than a quarter (28.3%) of the vote in the first round of the Romanian presidential elections. Having made it to the runoff, the leader of the political party România Mare (Partidul România Mare, PRM, Greater Romania Party), who entered politics in 1991, scored his biggest win to date (33%). In the subsequent parliamentary elections his nationalist party polled 20% of the vote. Incapable of repeating their 2000 success, România Mare and its leader have since managed to retain the support of around 13% of the electorate by embodying the aspirations of national pride combined with an authoritative presence of the nanny state. Five years later, in June 2005, Bulgaria likewise saw a nationalist vote: Ataka, a party created two months before the parliamentary elections, won 8.93% of the vote and twenty-one out of a total 240 seats in parliament. The emergence of this radical xenophobic party provoked a huge outcry from the public and the political class, with some MPs even calling for a boycott against the elected nationalists. Even so, in the October 2006 presidential elections Volen Siderov, the leader of Ataka, made it to the runoff owing to the absence of a credible political alternative to the outgoing president, Socialist Georgi Parvanov.