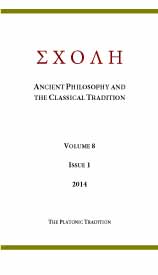 Summary/Abstract: In the first and second parts of the article we look at two archaeological sites excavated in the center of Athens, a building, located on the Southern slope of the Acropolis and now buried under the Dionysiou Areopagitou Street, known as House Chi, or the “House of Proclus”, and Houses A, B and C at the slope of the Areopagus overlooking the Athenian Agora. We outline and illustrate the basic finds and reexamine the principal arguments in favor of identifying these constructions as the houses of philosophical schools and, in the third part of the paper, offer a remark on religious practice in the Neoplatonic school.