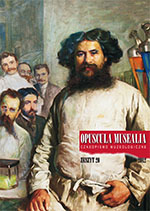 Summary/Abstract: Lacquered Berlin vases are a small group made using unique manufacturing technology and technique., consisting of faience vessels of different size and form , white-glazed on the inside and at the bottom, with marks in the form a Chinese coin or artemisia leaf, on the outside adorned using a European lacquer technique. Black-, red- (in the shades ranging from vermilion to claret), navy-blue- and green-ground, as well as red-and-black vases are known. The vases are richly adorned. Basically, they feature two types of decorations: nature scenes and more or less elaborate Chinoiserie landscapes with architecture and human figures. The scenes depicted on the bodies form the main ornamental motifs on the vases. The decoration includes friezes, various ornamental motifs, and sometimes also small scenes featuring nature and landscapes. Decorations are identical only within a given set of vases. It is possible that original Chinese porcelain vases dating from the K’ang-hsi era can also be considered to belong to the group of lacquered Berlin vases, as in Europe they were redecorated using European lacquer similar to the decoration on the Berlin vases. Lacquered Berlin vases are still poorly discussed. The question of dating of their provenance is still indecisive. On the basis of stylistic analyses their origin was dated to the end of the 18th century (Otto von Falke, Walter Stengel) or to the years 1720-25 (Max Sauerlandt, Konrad Hüseler, Walter Holzhausen) . In 2003, Samuel Wittwer went beyond widely-held opinions, formulating the thesis that lacquered Berlin vases might have been forgery or at least imitations dating from the 2nd quarter of the 19th century,” and that it is possible that “the exclusive circle of buyers was aware of the true provenance of these “Chinese porcelain” objects and purchased them as ‘imitations’ of works which were not available to a wider public.”