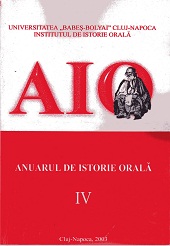 Summary/Abstract: The study entitled “Everyday Life of the Basarabian Combatants during the Soviet-Afghan War (1979-1989)” pictures an image inside the Soviet army during the conflict in Afghanistan. In other words it presents an alternative view of the official line (the one imposed by the Kremlin’s leaders) on the Soviet intervention in the neighboring country. The everyday life of the participants in Moldavian Republic to the Soviet-Afghan war was studied and analyzed on three dimensions: the military training, military combat, and spare time. At the end of the article there are also some conclusions. Thus, their everyday life occurred within the limits of a microuniverse that had its own existence and survival conditions. It represented a transition from a peaceful everyday life to a totally different, hostile, and violent world that could cause not only psychological trauma but finish you physically. As part of the civil society but at the same time of a war context, the Soviet young combatants would go through a period of adaptation to a warfare situation. This meant military training: the school of the future soldier that was to participate in the military conflict in Afghanistan. The military leaders tried hard to ensure proper training conditions for the young recruits. The two stages of the military training (the first one took place in U.S.S.R and the second one in Afghanistan) together with the political mentor, the posters, the propaganda materials, the military theoretical subjects, the physical training, the accommodation to the climatic conditions (similar to those in Afghanistan) etc., represented parameters that would make sure that the Soviet combatants were well prepared theoretically and practically as well. The official Soviet propaganda presented the military contingent of the Fortieth Army in Afghanistan as a victorious one. But the reality on the field showed different: most of the administrative centers were either in the hands of the opposition forces or deserted with no inhabitants. The warfare context influenced the everyday life of the Soviet combatants. The soldiers that were going through military service in the “active areas” – Bagram, Djelabad, Kandagar etc. – which were strategically important areas, accomplished the most significant military operations. It is also important to mention the special units’ activity that took place in the background (they were not part of the Soviet army), and were never admitted by the officials in Moscow. The best-known military confrontations between the two belligerent parts were the so-called “cleaning out” the adversaries in the localities, the raids in the mountains, ambushes etc. When “cleaning up” the Afghan localities the Soviet tended to kill, first of all, the adversaries (including the children who carried weapons), which meant those people that fought using armed methods and not the civil population that did not oppose...