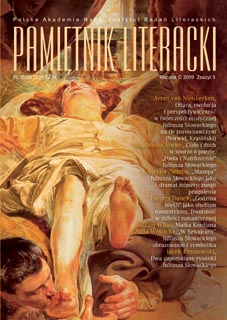 Summary/Abstract: The paper is a presentation of Juliusz Słowacki’s two drawings done most probably in the first months in 1845. The drawings have never been reproduced and the scanty pieces of information on them are either casual or grossly inadequate. The first drawing shows in a satiric way an episode common among the émigrés: Mickiewicz’s prophetic vision signaling Andrzej Towiański’s arrival to the West. The second drawing is an ironic and derisive evaluation of pro-Russian tendencies in the Circle of God’s Cause initiated by its founder Andrzej Towiański and his deputy, Adam Mickiewicz. At the turn of 1844 and 1845 Słowacki actively and keenly protested against the aforementioned tendencies: he wrote proclamations, notes, letters, and poems. Their analysis in the first part of the paper (fragments 3–5) gives evidence to prove that at a moment the drawings in question appeared as an important element of some action lead by Słowacki. One may not exclude the idea that while working on them, Słowacki thought of publishing them (and it was probably also with the intention that he copied a poem from his draft to give it a title in the clean copy A Lair