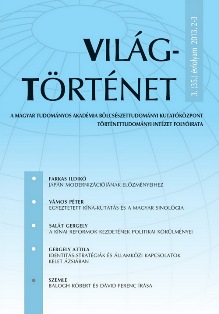 Summary/Abstract: The article describes the issue of modernity on the Korean Peninsula from the late 19th century until the recent days. Korea became the so called ’Hermit Kingdom’ in the middle of the 17th century , after the manchu Qing-dinasty came to power in China. In the late 19th century various attempts happened to pull out Korea from the status of the ’Hermit Kingdom’. The article analyzes the growing influence of Russia and Japan, and the period of the Japanese colonial rule from 1910. After the national liberation in 1945 the Korean Peninsula divided to South and North, and two rival states were established in 1948. The northern part had a better situation in the late 1940s: they had the majority of the Japanese built industrial and power plants. However, the DPRK (North Korea) lost its privileged status soon, despite the continuous support of the Soviet Union and the other socialist countries. In the final part the article explains the reasons which made it possible the rapid development of the ROK (South Korea) during the presidency of general Park Chung-hee.