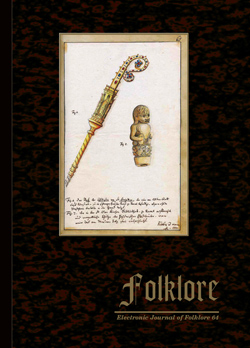 Summary/Abstract: This article presents a system of colour symbols in Mari folk songs based on the results of a multifold investigation. The research was carried out with the help of a complex technique applied to 2100 songs from different song collections. Mari colour symbols have never before been the object of research. The process of investigation included several steps. The most important of these was the semantic analysis that helped to discern 2000 mentions of four main spectre colours as well as white, black, silver, and golden. Quantitative data evaluation singled out a dominant group by a dichotomous method, applying the principle of simple majority employed in mathematical statistics. The same technique divided the other colour symbols into complementary, auxiliary, and insignificant groups. The results of an investigation into ethnic symbology are also shown graphically. The main reconstructed meanings of colour in the analysed songs denote such emotions as joy, wonder, astonishment, grief, melancholy, some aesthetic ideals, ethical vices, as well as people’s character and appearance.