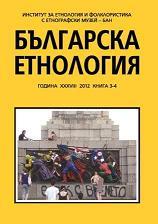 Summary/Abstract: In the last two decades the Bulgarian society has lived through significant transformations in politics and economics leading to essential changes in one of the major fields of daily life – the work environment. The „jump“ from the labour world, shaped by the socialist social and economic relations and their inherent economic philosophy and practice, into the postmodern labour world in the last decades of the XX c. turns out exceptionally problematic and accompanied by numerous contradictions. Along with a number of disruptions, however, in the work environment and work relations after 1989 there have been a few continuities that could be studied and analyzed from the perspective of ethnology. Under the new economic conditions people do not know of familiar models of acting in market economic environment, and for that reason, in the first place they turn to well known and assimilated dispositions, approaches and cultural resources in order to cope with the problems and challenges in the sphere of paid labour after 1989. This paper presents two cultural approaches applied in the economic environment of the small entrepreneurship in Bulgaria: the instrumentalization of the personal informal relations and the personalization of the formal professional relations. The use of informal networks and relations existing in the private sphere for the creation and functioning of small enterprising organizations has been a frequently observed phenomenon during the transition period in Bulgaria. The author analyzes the development of this approach in the last twenty years and in addition studies the advantages and problems resulting from its application affecting employers as well as employees. The conscious transformation of the formal relations in the small enterprises and the established formal contacts with institutions and economic partners into informal relations is the second subject of the investigation. Another objective of the paper is to identify the motives behind this transformation along with the real consequences in personal and social perspective. The analyses are based on cases of Bulgarian private enterprises in the sphere of small entrepreneurship. The basic methodological approach is conducting empirical field research for a long period of time that involves semi-structured interviews and informal conversations as well as partial application of participant observation in the framework of the daily labour routine. In view of the more comprehensive representation the informants are selected from various hierarchical levels and from among different age groups.