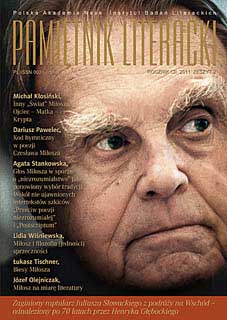 Summary/Abstract: The article is an attempt at interpretation Czesław Miłosz’s poem “IT (TO)” from the collection under the same title published in the year 2000. The poem is a multifaceted riddle and its ambiguity can be seen at many levels of the text’s structure and in its theme. The poem’s modality also proves vague since the subject of its metapoetic reflection can be both the poet’s prior accomplishment and his creative intentions, thus the presence of genre relationship with the elegy, manifesto, and poetic testament. The poem is rhetorically complicated and abundant in the course of argumantation, hence it seems not to be a confession but a sophisticated play of the poet who accepts changing roles and putting on various masks. The pronoun used in the poem’s title indicates the object of comment (thought, feeling, fear), the name of which is either intentionally passed over in silence or does not exist; yet, an effort to characterise “it,” made as an array of comparisons, is either a supplementary periphrasis or a catachresis of the Inexpressible.