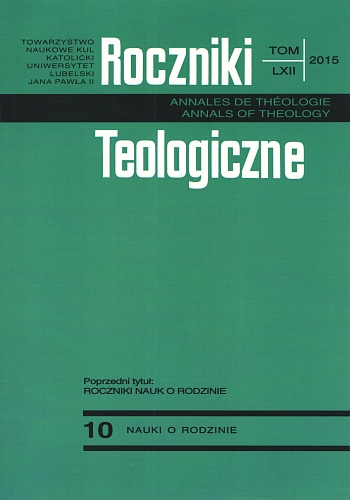 Summary/Abstract: The aim of the present article is to reflect on the theme of renewing the proclamation of Word of God and His influence on a man and a family. Word of God has the power of touching a man, purifying his relations and sanctifying family life. Kerygmat was determined as one the functions of materializing the Church. The discussed matter is realized according to the scheme of analyzing functions in mathematics. In the first part – as a way of defining domain of a function – different groups of recipients of proclamation in a parish and family are introduced. In the second part – describing the function's output – the way of proclamation, preparing the sermon and preaching the Gospel was analyzed. Thoughtful ways of reaching different groups of recipients and attempts of Church to pass word of God to every man are discussed. In the third part – introducing the set of values – the outcomes of proclamation are shown. God's word accepted by a man makes him grow in a greater maturity and at the same time influences the quality of human relations, especially the ones within family. A man who lives by word of God is enabled to grow in holiness and fulfill koinonia – his communion with God, world and other people, even in the life of his own family.

„STACJE GÓRSKIE” – ICH GENEZA I EWOLUCJA ‘MOUNTAIN RESORTS’: ORIGINS AND EVOLUTION 2009 Czy egzorcyzmy są potrzebne? Do they be wanted exorcism? 2013 THE PHENOMENOLOGY OF TOURISM SPACE THE PHENOMENOLOGY OF TOURISM SPACE 2014 Ewangelia Marka przesłaniem o królestwie zrealizowanym The Gospel According to Mark as the Message of the Realised Kingdom of God 2017
2021 © CEEOL. ALL Rights Reserved. Privacy Policy | Terms & Conditions of use
ICB - InterConsult Bulgaria ver.1.7.1115