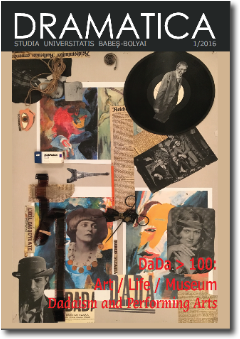 Summary/Abstract: Between letter and voice or the Dadaist cult of transitiveness. This paper aims to analyze the way in which Dadaists tried to liberate literature from its typographical permanence through their oral poetical experiments. Our thesis is that Dada inaugurated an esthetic of transitiveness, of the poem as spectacle, a temporally and temporary act that may have its origins non only in primitive forms of artistic manifestations (such as African music and rituals), but also in the European tradition of medieval jogglers and minstrels. Even though fundamentally different, the medieval and the Dadaist performances are a form of theatrical expression that aim at an artistic totality, by implying the simultaneous use of voice, gesture, music and dance, and in the same time at an unique and unrepeatable representation, defined by instability and textual mobility (mouvance). The poem becomes, in both cases, a pre-text and a starting point for a much more intricate and transgressive text, that of the performance itself.