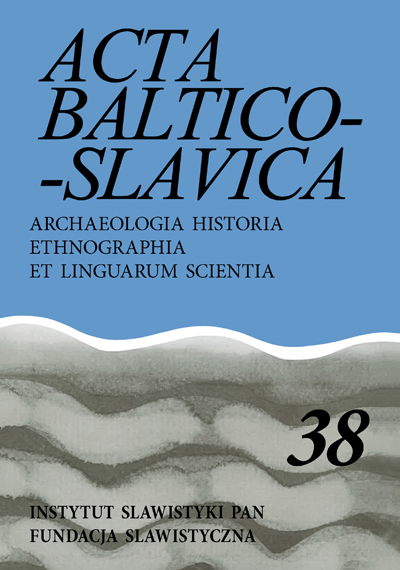 Summary/Abstract: The article deals with the Belarusian elements in the Russian dialect of the Old Believers living in Poland. The Old Believers arrived in Poland in the second half of the 18th century. At present they live in the Suwałki-Augustów region in the north eastern Poland. They inhabit mostly two villages in the county of Suwałki, namely Gabowe Grądy and Bór, which are very close to each other, and three towns: Augustów, Suwałki and Sejny. The dialect used by the Polish Old Believers represents the western Central Great Russian dialects characterized by akanie, the so-called Pskov group. They share features which are typical of Pskov. The dialect was also influenced by other north-eastern Belarusian dialects, that is, the ones which were closest to the areas originally inhabited by Old Believers, who migrated in phases. After each phase, their dialect came to reflect some new linguistic influences. A large number of lexemes directly borrowed from Polish, or via the Belarusian language, are found in this dialect, which is also characterized by other features common in Belarusian dialects or the Bulgarian language. By way of illustration, they include the following features: the prosthetic j-, prosthetic v-, the occurrence of the endings -im and -ym in the case of singular masculine adjectives in the locative, promotion of the endings -i and -y in the case of the plural masculine and neutral nouns in the nominative, and the occurrence of lexemes borrowed from the Belarusian language.