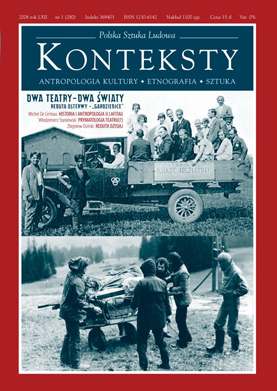 Summary/Abstract: The article discusses Golgotha – an enormous painting by Jan Styka (1858-1925), considered to be the largest such composition in the world (ca 60 x 15 m). The canvas was executed in 1896 and despite its huge size, is an outstanding work. From 1904 it was featured in the United States, and for over sixty years has been the focal point of the Forest Lawn Memorial Park Cemetery in Glendale, in the suburbs of Los Angeles. Its characteristic features include an interesting iconography and a history as fascinating as it is dramatic. The first part of the article considers the artist and his life: studies in Vienna and Rome, the majority of important works executed in the last decade of the nineteenth century, collaboration on once famous panoramas (such as The Raclawice Panorama) and, finally, the Parisian period in his oeuvre. Styka won international acclaim, which allowed him to own a villa and a studio in Paris and a residence on Capri (Villa Quo Vadis). The author goes on to present the dramatic story of Golgotha, which after being exhibited in Warsaw, Kiev and Moscow, was to be featured in 1904 at the world’s fair in St. Louis but never reached its destination. Attempts at transporting the canvas from New York to Paris soon encountered obstacles. Discouraged by clashes with customs officers Styka decided to leave the painting in America and never saw it again. In 1911 Golgotha was shown at the Chicago Opera House, and soon found itself in the storerooms of the Civic Opera Company in Chicago. Here, in 1943, rolled around a telegraph pole, it was discovered by Fred Hanson, an envoy of Hubert Eaton, the creator of Forest Lawn. After lengthy conservation carried out by the artist’s son, Adam Styka, and his wife Wanda, and the construction of a suitable auditorium, the painting was unveiled on Good Friday 1951, to become the greatest highlight of the Forest Lawn Memorial Park. The canvass shows a scene sometimes described as the Crucifixion but de facto depicts a moment preceding that event. A longhaired and bearded Christ with an irregular nimbus around His head, and wearing a long white robe, stands upright, gazing steadfastly at the sky and the descending wide beams of light. A ray striking Him enhances the white colour of the robe, which is almost as bright as in the scene of the Transfiguration. A centurion near-by reads the verdict from a large tablet and with his right hand points at the Christ. Almost all the witnesses of the event, including the two semi-nude thieves, the Apostles, and the Madonna are motionless, the overall impression being that some of the gathered persons and the heavens were paying homage to the Condemned in white. This scene, so very different from many other versions of the Crucifixion, takes place against the background of a sprawling panorama of Jerusalem and environs.