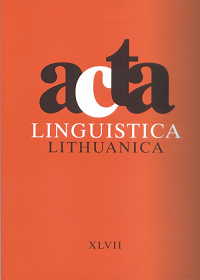 Summary/Abstract: Examples of the use of the finite verb and the genitive with agent function are given from Old Indic, Old Persian, Tocharian, Greek and Slavic. It is suggested furthermore that the genitive object of certain verbal classes, e.g., Indo-European verbs with the suffix *-Á- may originally have functioned as an agent and that the etymological subject was the patient.