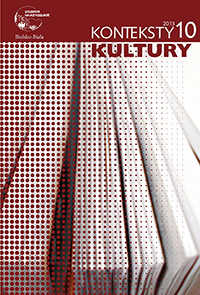 Summary/Abstract: The author analyses fragments of the journalism and quasi-memoire of Jan Błoński, a distinguished critic of the Polish and foreign literature, expert on the work of, among others, Gombrowicz, Mrożek, Proust and Ionesco, and reflects on his creative legacy. He proves that Błoński did not finish his memoire due to the inability to express his own experience of life in the PRL due to the lack of an adequate language to describe the post-war reality. According to Błoński, the thread of tradition connecting the worlds of the consecutive generations was abruptly broken upon the emergence of the communist and fascist totalitarianisms, and the old concepts, such as the truth, religion and patriotism, lost their previous importance. Under the circumstances of radical falsifi cation and superfi ciality of everyday life in the PRL, in the author’s opinion, Błoński sees a chance to maintain the identity in remaining faithful to the old tradition, custom and religion. At the same time, aware of the impossibility to recreate the old world, to be protected from the nihilism of the time, he investigates laughter – Błoński’s sadness remains a cheerful kind of sadness.