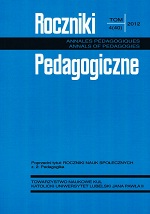 Summary/Abstract: The article is regarding the mobilization of the elderly people taking place through activity of the University of the Third Age. An occurrence of the old age was described with her significant features including biological, psychological, social and spiritual dimensions of the life of the man. The elderly gradually is backing out of performed roles in society, can feel loneliness, pushing the social life into the background and produced fears with expectation of the death. A fact that seniors have a great development potential was emphasized, need of active activity in different fields of the life and the tendency of developing many interests. A history of the formation of the University of the Third Age was presented as well as their mission, cells, functions and areas and forms of the influence on the elderly were characterised, as well as to the society. These institutions are motivating elderly people in the intellectual, emotional, public, cultural and artistic aspect, as well as enable to include into the course of events general- social. School curricula carried out and forms of the influence contain a lot of contents of the gerontological prevention. University for seniors are counteracting the social exclusion of this group as well as are activating to action and the improvement of the quality of their life.