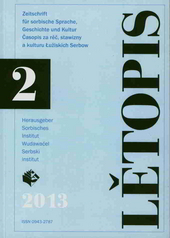 Summary/Abstract: The Sorbian spoken today in Upper and Lower Lusatia is what remains of an earlier extensive Old Sorbian dialect area between the Elbe/Saale rivers in the west and the Bober/Queis rivers in the east. It was not a uniform language, but was divided up into Sorbian proper, represented by the Upper Sorbian language type, with clear links to the former south-eastern branch of Proto-Slavonic, and an adjacent, relatively broad transitional strip in the north-east bordering on the former Lechitic language. Here the actual Old Sorbian tribes, which advanced down the Elbe from the Bohemian basin, met the Lechitic tribes. This resulted in a kind of hybrid language, which formed the basis of the later Lower Sorbian language.