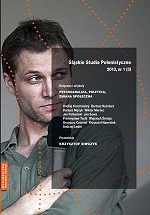 Summary/Abstract: The author of the article, writing about political events from 2011 that took place in the Far East, as well as in Europe (Madrid) and the United States of America (the Occupy Wall Street movement), questions the accuracy of liberal perspectives of the process of democratisation, and, at the same time, arguments in favour of the universality of demands (“the centre” and “the periphery”), a hypothesis saying that traditional divisions into, for example, a left, right and central wing, vanish in today’s (post)political reality. The article is an attempt to capture a multi-dimensional aspect of the Arab Spring, and place it in a wider context of global democratic changes. The author introduces a collective and communist point of view in a sense postulated by Hardt and Negri. In his analysis of ultra-democratic practices of folk meetings, he uses Jacques Lacan’s concept of voice as a partial object. On the basis of this concept, a key distinction between the people and the multitude as the subjects of two extremely different political systems is made. The author encourages us to take an attempt at a political application of Lacanian psychoanalysis, which would allow for capturing multitude as the subject remaining beyond castration, namely the subject that is, though, capable of being embraced by a psychoanalytical language.