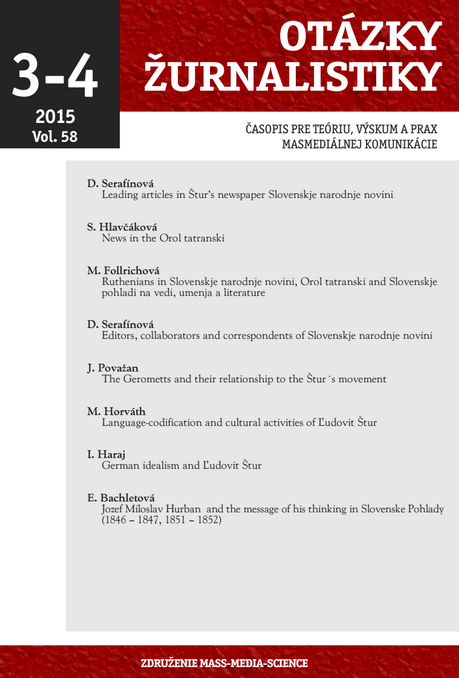 Summary/Abstract: This article aims to point out the important role played by the members of the Gerometts family from Žilina (Slovakia) in the national movement in the middle of the 19th century. Even though their origin was Italian, during three generations they completely adapted to Slovak enviroment. They have become contributors to periodicals published by Ľudovít Štúr and Jozef Miloslav Hurban. They were active supportes of the national movement and they are demonstrations of overconfessional cooperation by the improvement of the Slovak nation.

Numerati Numerati 2009 Cirkev a jazyk médií The Church and the Language of the Media 2009 Komunikačné preferencie univerzitných študentov na Slovensku v prostredí internetu a ich vzťah k problematickému používaniu internetu Communication preferences of university students in Slovakia on the Internet environment and their relationship to the problematic Internet use 2013
2020 © CEEOL. ALL Rights Reserved. Privacy Policy | Terms & Conditions of use
ICB - InterConsult Bulgaria ver.1.5.0616