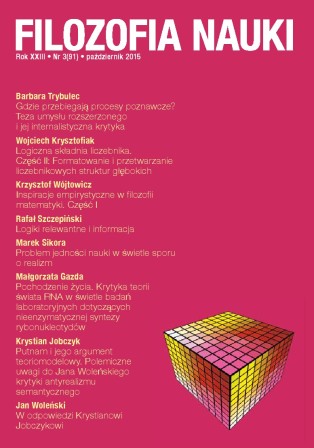 Putnam i jego argument teoriomodelowy
Putnam and His Model-Theoretic Argument

Summary/Abstract: This paper examines a pro-realist interpretation of Hilary Putnam’s so-called Model-Theoretic Argument (against the metaphysical realism) put forward by Jan Woleński in his monograph Epistemologia. We argue that neither the mutual relationships between theories and their models nor the objective of Putnam’s argument,nor the role of the Löwenheim–Skolem theorem in this argument were adequately grasped by the author of Epistemologia. In particular, we point out that Woleński’s interpretation is too literal (with respect to the problem of relationships between theories and their models) and simply unsound. We also intend to show that theModel-Theoretic Argument is much more elusive than it can be observed from a realist point of view.