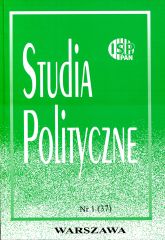 Summary/Abstract: When planning the post-war peace order, the antifascist coalition decided to extend their plans to include not only the states of the United Nations, but also “nations or authorities associated with them.” The term “associated” referred to those countries that were not at war with the Axis powers, but showed solidarity with the United Nations during the war. They generally included Latin American countries, which were more or less engaged in supporting the antifascist coalition. Latin American countries were actively engaged in the process of constructing the post-war order that was progressing from 1943. This was evidenced by their collective participation in specialized conferences of the United Nations (Hot Springs, Atlantic City and Bretton Woods), and by engaging in discussion on the project of the new public safety system — the future UN — developed by the four powers at Dumbarton Oaks and also circulated to Latin American countries. It caused a lot of controversy in Latin America and aroused fears of a clash of attitudes to the proposed solutions of the American unity. In order to overcome the problems and to strengthen the position of the region at the upcoming United Nations Conference devoted to the development of the new organization’s statute, the Inter-American Conference on the Problems of War and Peace was convened in Mexico City in February 1945. Its aim was to develop a common position for the upcoming conference in San Francisco, dedicated to the development of the statute of the future United Nations.The meeting in Mexico City proved to be important for the course of the debate in San Francisco. It made it possible to agree on many issues, and thus helped the United States in difficult discussions with the three Soviet delegations (USSR, BSSR and USSR), and increased the impact of Latin American countries on the final drafting of the Charter of the United Nations. Its local aspect, however, i.e., the shape of the peace order in the region, was of more importance. The final document of the conference, The Act of Chapultepec, changed the nature and structure of the then Pan American Union — it expanded its formula and transformed the union into a political and military bloc.