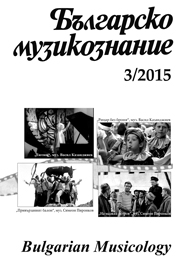 Summary/Abstract: The reviewed book includes studies representative of the author’s area of research interests, which have been published in Bulgarian academic journals over the last decade. In terms of their contents, three groups of issues are discernible: the first one, which is also the main, is on the twentieth-century New Music. This issue is treated in: On truth and method in the twentieth-century New Music; Ideologemes at the turning point of the twentieth-century New Music; The twentieth-century New Music on the horizon of two leading thematic projects of Modernity: Fragments; Dichotomies and polarizations in Schoenberg’s holistic autonomous and terminological system and The concept Musical Idea (musikalischer Gedanke) in Schoenberg: an attempt for interpretative reading. The second group of issues is outlined through the construction by the author of a new area in musicology: the study The paramusical sphere as a subject field of semiotics. The third group is related to those of the phenomena generated by the post-modern culture that fit into the general term World Music: the study The World Music concept and the ethnocentric model. Being various and even establishing relations of opposing to each other, the phenomena subject to description and exploration in the three categories, are united by Yordanova’s general view and the approach related to it. This view is beyond doubt musicological, in a fundamental sense though. In it, musicology expands its philosophic horizons in order to bring up not only theoretical issues of musicology, but also those of the men of music. Within such horizons, the author goes beyond the boundaries of the aesthetical subject of music, referring to beauty, to study it as a language capable to speak of the truth of existence.