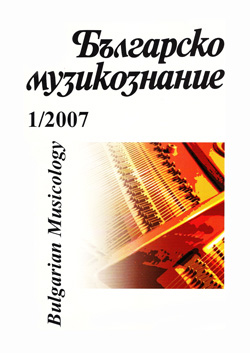 Summary/Abstract: Among the works of Dobry Christov (1875-1941) - composer, music theoretician, historian, folklorist, conductor, and pedagogue - can be found some of the clearest examples of new Bulgarian church music, including his two Liturgies on St. John Chrysostom (1925 and 1934) and Songs for All-Night Vigil (1935-1939). Perhaps the latter is the single most undeniable affirmation about his liturgical works. Sufficiently complicated and ambiguous, Christov’s work contains hidden risks for scholars who study it, since they, in their desire to categorize it within certain boundaries, consider it using a dichotomous model in which it is either a musical genre, an individual composition, opus musicum, taking its place within the system of composed works, or it is music meant to accompany the Divine Services. This dichotomous schema, which is quite ingrained in Bulgarian musicology, can be overcome through a rereading of Christov’s numerous texts about the history of church song, through which his idea of the “churchness” of music can be reconstructed, which itself overcomes the either-or paradigm.