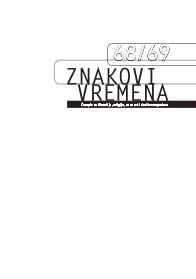 Summary/Abstract: The title of this scientific work “NATIONAL SECURITY SYSTEM OF BOSNIA AND HERZEGOVINA” implies in itself an important concept which is a system of national security of a country in the case of Bosnia and Herzegovina. We live in an era of globalization, the great technical, scientific and technological development where interaction and communication between people as the members of different cultures and civilizations have reached a very high level, and these are all factors that multiply the security challenges for the state and the security systems at the beginning of the new millennium. In this scientific work there is an attempt to answer the question to what extent a system of security has been built and what problems stand in the way of its further development and construction. Taking into consideration the complexity and danger of the problem of terrorism at the beginning of the XXI century, it is necessary to objectively assess and point out all the possible mistakes and shortcomings of security of Bosnia and Herzegovina and work to increase its efficiency. It contributes to the fact that Bosnia and Herzegovina is a very complex formed state (with two entities and Brcko District), with great political influence in making decisions important for the normal functioning of the state and its security system. Also, it has recently emerged from the severe armed conflict that ravaged its economic, social and security capacities, which is a major problem in the process of building the state and its security system.