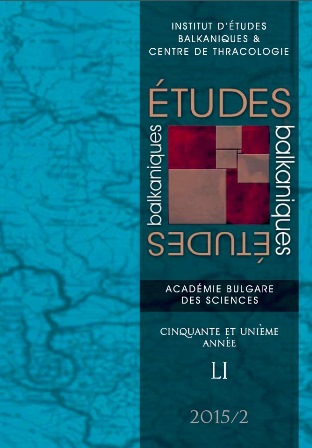 Summary/Abstract: “Sources of the Bulgari Chronicle” is the first attempt all written sourcesof an anonymous chronicle to be revealed. This chronicle has come down to us intwo manuscripts in Italian (one of them is entitled “Un manoscritto (18° secolo)che riguarda la storia dei conti Bulgari”) found in the archive of Bulgari family ofCorfu. It was published bilingually (in Italian and in Greek) in 2010 in Greece byStefanos Konstantinos Voulgaris, a descendant of the Bulgari family. The Chroniclehas evoked great interest in Bulgaria because this is the first comprehensive presentationof the Bulgarian medieval history in a separate book that has reached ourtimes. The revealing of the Bulgari Chronicle’s sources is an important task becauseit will provide information about the nationality of its unknown author, about hisancestry, about the time of the Chronicle’s composition. All authors and titles referredto in the Chronicle are presented in tables, which indicate that there are twomain sources of information. They are the works of the Jesuits Louis Maimbourgand Antonio Foresti, due to which the history of the Bulgarian medieval rulers, representedas forefathers of the Bulgari family of Corfu, has been compiled. As a resultof the analysis done, it is concluded that the author of the Bulgari Chronicle was anItalian, a devoted Catholic, who followed the principles of the historical writing inthe time of the Counter-Reformation. As to the time of the Chronicle’s composition,the possible terminus post quem is 1693, determined by the chronological order ofthe printing of the volumes of Antonio Foresti’s “Mappamondo Istorico”; the terminusante quem is 1698, when the Venetian Senate issued a decree conferring Antonio Bulgari and his successors the title of count.