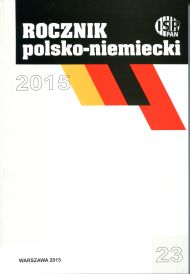 Summary/Abstract: This article attempts to analyse the problems of teaching German in Poland as a language of a national minority. According to the Polish law, the aim of such language classes is to maintain the national identity. As early as in the 90s of the twentieth century, however, when people were allowed to learn German as a minority language, there were allegations that some of them would send their children to these lessons without feeling de facto any relation to the German minority; they just wanted their children to learn a foreign language. During more than two decades of teaching German as a minority language, a number of interpretation problems appeared in the Polish education system concerning the principles of this teaching and persons entitled to receive education in this form. Applications for the admission of children to a German language course are treated as a declaration of nationality. A controversy also arises about the amount of additional financial resources provided for the organization of the minority language classes from the educational part of the general subsidy that is often compared to the funds allocated by the German authorities on the activities of the Polish diaspora and Poles in Germany. At present, the German minority in the Opole region undertakes a number of activities to promote bilingualism and thus overcome the conflicts around the German language, and to draw attention to the benefits of knowing more than one language as a first/second language, and not just as a foreign language.