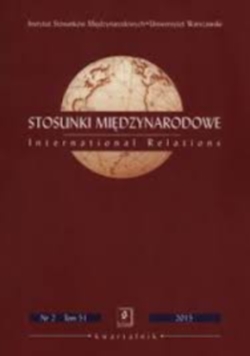 Summary/Abstract: Political economy of international relations is one of the most dynamically developing elements of this discipline in Latin America. The reason for this is that development is the primary aim that the countries of this region are trying to achieve, both through the internal and external dimension. Since the establishment of the United Nations Economic Commission for Latin America and the Caribbean(CEPAL), the issue of development has also been the subject of discussion on the regional level, and the concepts developed on this forum constitute a coherent and comprehensive approach to this problem. The aim of the article is to present the evolution of the Latin American political economy of international relations and to show a number of dominant trends. I will try to prove that the frequent frictions between endogenous and exogenous ideas as well as the attempts to force a universalist vision have stimulated the development of the Latin American political economy of international relations, which was able to resist external pressure.