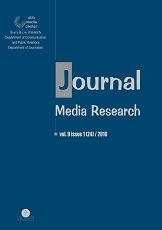 Summary/Abstract: The present article investigates the role played by mass-media in structuring the public discourse regarding the adaptive efforts of the Romanian immigrants in the German cultural space in the European Union and their relation to the host country. The problem of the immigrants from South-East Europe has become one of the main topics of the public discourse. The paper argues that the Romanians’ migration to Germany has certain specific embedded features based on their cultural and historical past and, secondly, on economic motives. The article identifies the German media’s social representation of the Romanian immigrants, in the context of the European cultural identity.