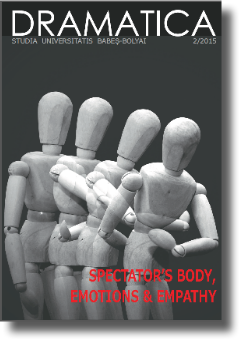 Summary/Abstract: Theatre as a means of social debate and commentary has always reacted to the political context of its time. One of the exemplary artistic movements of the kind is the Polish alternative theatre during communism. In communist Poland there were several groups, companies and alternative theatres that were more focused on the contents of their performances and on ethical values, rather than on aesthetic and artistic values. This means that the concern for theatre aesthetics was shifted towards theatre as a vehicle for ethical questions and problems, as well as one for social and moral change. The groups that were known for their political performances were, among others: Ósmego Dnia, Provisorium, Teatr STU, Teatr 77, Teatr Kalambur and Pstrąg. From Studencki Teatr Satyryków to Pomarańczowa Alternatywa, political theatre groups had always dealt with the ethical aspects of Poland’s social reality. My paper aims to present the way the communist dystopia influenced and was reflected in the performances of some of the alternative theatre groups that came into existence in communist Poland between 1954 (the year when alternative theatre was born in the Polish community) and 1989 (the year that marks the fall of communism in Poland).