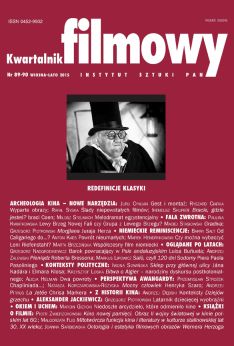 Z szacunkiem do przeszłości
With Respect to the Past

Summary/Abstract: A book review of Piotr Zwierzchowski’s "Kino nowej pamięci. Obraz II wojny światowej w kinie pplskim lat 60". ["The Cinema of New Memory: The image of World War II in Polish Cinema of the 1960s"] (2013). The book was awarded with the Bolesław Michałek Prize, and is an analysis of Polish model of war cinema of the 1960s, which the author calls the “cinema of new memory”. Films of new memory are those, to cite the author, which are dependent on politics, but take into the consideration also stereotypes and resentments present in society, treating the war as a myth of origin of the Polish Peoples Republic, containing the conviction that the Polish experience of war was unique, whether in terms of suffering or heroism, assuming the presence of an overriding causal and moral order, using film genres to create national identity, with defined strategies of making the visions of the past credible, linking the war with the present, referring to Polish Film School, and demonstrating the primacy of the collective over the individual memory, aiming to blur the divisions present in society and making the viewers aware that the war was not over yet. The author, drawing on the methodological concept of the new historicism, in a model way analyses and interprets individual films, referring to the ideological, socio-political and production context of their creation, using for this purpose a wide range of archival sources.