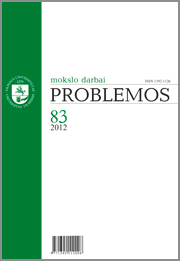 Summary/Abstract: Already back in 1940 Walter Benjamin told us that “the ‘state of emergency’ in which we live is not the exception but the rule.” While invoking this claim, Giorgio Agamben enriches the contemporary biopolitical discourse with such concepts as ‘state of exception’ and ‘homo sacer’, which refer to bare lives of the majority of world population under contemporary capitalist and state rule. This paper, which seeks to analyse the work of Agamben, presents the notion of the state of exception by Carl Schmitt and counterposes it to the Benjaminian concept of divine violence. This counterposition allows to theoretically question the Schmittian politico-theological discourse which has been increasingly used by the conservative intellectuals and right-wing movements in the Eastern Europe, ‘the necessity of defending the nation and the state’ that they posit and to show the often concealed links between this discourse with biopower regimes. On the other hand, it is an attempt to point at a presence of multiple and radical constituent forces which, beyond liberal – constitutional and authoritarian – conservative frameworks of the State pose the threat to the political and economic order of late capitalism.