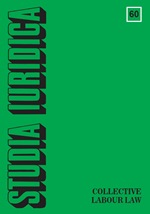 Summary/Abstract: The author presents a summary of the evolution of European Social Dialogue after World War II, starting from the 1960’s. He describes the main trends in the evolution of that dialogue, in the countries of the old European Union on the one hand and in the post-communist countries on the other hand. In particular, the paper focuses on the evolution of social dialogue in the Third Republic of Poland. The author has divided the process of that evolution into several periods. The first period is until 2001. In that period of time the main difficulties with the implementation of the dialogue were the weakness of trade unions and the domination of the governments over social partners. The institution of social dialogue was established in Poland as a result of a wave of strikes caused by the fear of privatisation, resulting in the appointment of the Tripartite Commission (TC). After 2001 and the adoption of the “Act on the Tripartite Commission for Socio-Economic Issues and Voivodship Commissions for Social Dialogue”, the way to the TC has been opened for the employers’ organizations and new trade union organizations. However, Polish trade unions still have a very limited ability to mobilize the working class and are still endangered by political involvement. A look at the functions of the TC and the social dialogue shows that they do not include harmonization of interests to achieve important social objectives.