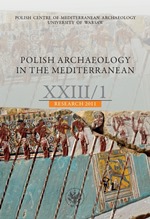 Summary/Abstract: In 2010 and 2011, excavations in the area of the eastern tower on the site of Banganarti 1 were carried out on archaeological layers altogether 4.50 m thick, comprising architectural remains and occupational layers associated with the tower and the nearby architecture. Two principal phases: wall I and wall II , were distinguished. A tower was observed in both phases. During the first phase the tower may have undergone some modification (subphases Ia and Ib), during the second, a new bigger tower was constructed on top of the earlier remains and a network of buildings interconnected by corridors, staircases and courtyards was constructed against the inside face of the wall.