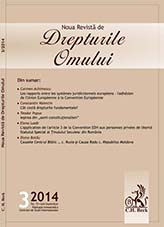 Summary/Abstract: The coexistence of European systems for Human rights’ protection has risen up some litigation-related problems, with regard to the interference between national and European courts, but also related to the interaction between the Strasbourg and Luxemburg Courts. This issue is quite difficult, taking into account that the relationship between the two European Courts has been spontaneously built-up and it does not have yet a conventional base. The Project for the European Union’s accession to the European Convention for Human Rights provides that the European Union will accede to the Convention on an equal position with the other high contracting parties; some adjustments are nevertheless considered to be necessary in order to preserve the European Union’s particularities. Therefore, the „co-defendant” mechanism is meant to guarantee the correct delimitation between EU and member States responsibilities, while the „prior involvement” would allow the EU Court of Justice’s intervention in cases in which it has not had the opportunity to pronounce on compatibility of an EU act with fundamental rights.