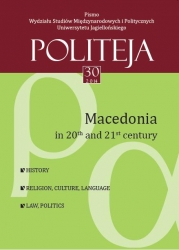 Summary/Abstract: The Republic of Macedonia is a state of highest democratic standards as reflected in the provisions of its constitution and laws concerning relations between various ethnic, religious and cultural communities. The multiethnic, multicultural and pluralistic nature of the Republic of Macedonia is visible and implemented in all spheres of social life. The human rights declaration adopted at the first sitting of the ASNOM1 is the basic document which defines the multiethnic nature of the just country established, much like the constitutional provisions of the DFM/LRM/SRM2 (1946, 1963 and 1974 respectively), as well as the 1991 constitution of the independent and sovereign Republic of Macedonia, where the Republic of Macedonia was defined asa nation (Macedonian) state with extensive rights granted to ethnic, national and religious minorities. Representatives of ethnic communities sitting in the parliament of the Republic of Macedonia, particularly Albanians, demanded that they be granted the status of the other equal nation. Dissatisfaction escalated and in 2001, i.e. a decade after the Republic of Macedonia had become independent, took a military form, and the conflict resolution was going towards the federalisation of the country. In 2001, a framework (Ohrid) agreement was signed brokered by international partners. Along with the accord, the notion of a nation state was abandoned and consequently also practising majority democracy, a model characteristic of states that are ethnically homogenous. The country was redefined as pluralist, multiethnic and multicultural; as a result instead of majority democracy a “division‑of‑power model” (in practice the term “participatory democracy” is used) was applied, characteristic of multiethnic communities, as prevention against interethnic confrontation.