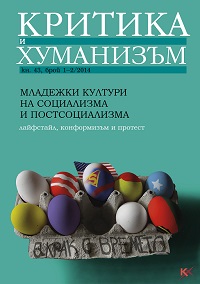 Summary/Abstract: The text analyzes the emergence and development of youth subcultures in Bulgaria in the 70s and 80s. It tries to put the problem in a broader context, including various aspects of the attitude of the communist regime to youth in general, the role of the Komsomol in the process, and attempts to control the protest potency among Bulgarian youth. Along with this, it tries to follow the process on the other side of the Iron Curtain - the evolution of the old and new countercultures that are copied, borrowed, but also enriched and domesticated by their followers in Bulgaria. In this sense, the social nature of youth subcultures in Bulgaria remains dualistically divided between imitation and authenticity. Despite this, however, it embodies the authentic rebellion of young people in Bulgaria against the conformism of their parents' generation, against the oppressive system and against the inertness of life. The article draws parallels with the emergence of major subcultural movements on the West - hippies, rockers, heavy metal fans, punks and wavers - and the subsequent birth of their counterparts in Bulgaria. The approach is historical – anthropological, crossing between archival materials and the fieldwork of the author in the form of interviews, surveys, external observations. The article ends by tracing the experi- ence of the regime in the years of Gorbachev's „perestroika“ to look for forms of peaceful coexistence with the subcultures, but also for their domestication and re-education.